Actor, singer-songwriter Kazuya tops the list as the hottest Japanese actor I’ve seen. There’s just something about that pretty face which makes girls melt. Plus, his cold, reserved, and distance yet lovable appearance in various tv shows and movies has consistently won the hearts of many fans. Furthermore, his performance on Yamato Nadeshiko Shichi Henge, a show based on the adaptation of a popular manga…[which so happens to be one of my personal fav. anime] was so well acted that it won the voter’s votes for best drama in 2010. For his pretty boy looks and amazing acting, capable of winning lots of female fans…Kazuya ranks #1 on this list of hottest Japanese male actors.

Another pretty boy who just so happens to have played the role of Tsukasa Dōmyōji in the adaptation of the popular anime ‘Hana Yori Dango’ which you might recognize as “Boys over Flower”. This anime is probably the most popular anime out there…it’s like the entry ticket to anime world. You have to see it before you can call yourself an ‘Anime Lover’. At the beginning of this anime, we all hate Tsukasa Dōmyōji, but as the story progresses, you slowly start to fall in love with his character….talk about being the ideal high school prince. It’s no wonder many school girls fantasized about this pretty boy.

There’s just something very distinctive about this actor’s look. He’s like a pretty boy that has grown into a man…a handsome one of course. If I were to describe his look in a sentence, I would say he has that Yakuza bad boy thing going on which some girls undeniably love. He also starred in Hana Yori Dango as Rui Hanazawa. If you don’t know who his character is, watch the show and you’ll instantly understand why he’s in the top five.

Sorry to break it to you gurls~, but this one is married. Sad??? Cheer up! There are four others you can set your eyes on or maybe not…LOL!

Miura comes in at #4 in this list for his gorgeous looks, acting, and popularity. He’s also the youngest on this list with a mere 25 years. He’s starred in popular dramas/movies such as Kimi ni Todoke; a popular manga adaptation, Last Cinderella, Samurai High School, etc. His newest role as Eren Yeager in the ultra popular film, Attack on Titans, is also based on the action horror manga series. The manga version is so popular amongst Otaku fans..[at least the ones I know] that you kind of feel excited yet worried at the shoes this guy would have to fill to meet their expectations. I bet he did great though….You Go Miura!!!

Another pretty boy turned hot with age. There are just some people who are the personification of wine, meaning they get better with age…he’s one of those. At the age of 43, this actor and singer got what we girls call…hotness overflow…[or is it just me???]. He’s also starred in popular movies and dramas such as the Last Cinderella, Operation Love, Doctor-X, etc. He’s also taken…so gurls, all I can say is ‘ ごめんなさい (Gomen’nasai) 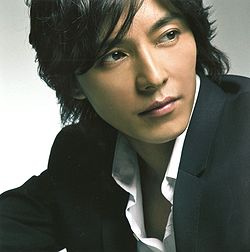 So, here we have it, our Top 5 Hottest Japanese Actors. Do you agree with me or Do you think I missed someone. Anyways, feel free to comment and like this post…Don’t forget to check out other posts on our blog. Byeee~