Aggies stick together. Now this is something I truly hold onto.

Call us fanatics, but we’re family.

So on the last full day in Mumbai, Daniella and I headed to the Train Station to meet Yogashree, our Aggie friend who lives in Mumbai.

We had told Aunti, our close friend’s mother whose house we stayed at, that we were going to see our friend since day one. Unfortunately, due to some conflicts, our meeting had to be postponed to the last day.

I met her in UNICEF, and she was one of the best dressed girls in every meeting. I remember asking her where she got her tops and she’d respond, “India.”

Well, life is full of surprises.

We took a cab and went to the train station. Then, we walked around, waiting for our friend for almost an hour and getting lost in the area. Luckily, a security lady fancied Daniella’s hair, so we let her ask about and touch it in exchange of some information on “Where’s a cafe with wifi?” And that was before we spotted a young foreigner and followed him. 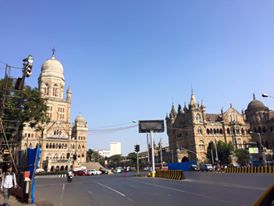 He looked like he knew where he was going, so we followed him to ask him, “Do you know where we can find a coffee shop?” Because my 3G sucked and I needed wifi to contact Yogashree.

But dude walked so fast – and while following him I spotted my one and true love: McDo.

We walked into McDo, used the bathroom, ordered coffee, and waited for Yogashree there.

When she found us, we were so happy. Half relieved as well that we could be found. Imagine if we were lost in Mumbai – not that it could ever happen under our host’s watch.

We talked for a bit, caught up on our lives, all missing the college life we’d left behind. Then, we started talking about the places we would visit, and Daniella surprised me the moment she jumped into the idea of going to the zoo.

And I asked the questions anyone in my family would ask:

Do the tigers have henna done on their paws? Or maybe they roar in Hindi?

Well, we never found out since the zoo barely had anything interesting to see. The zoo was mostly empty, and the coolest thing we met was Frankie, a pregnant monkey who was bored to death in her cage.

I called her Frankie because we thought she was a boy before.

So we spent some time talking to Frankie, asking her how her day was, if she liked it there in the cage, and who got her pregnant?

Was it the monkey who shared her cage, or was it the other cage monkey who was calling her for the past ten minutes? Was she married? Did she have an affair? What was going on?

After Frankie looked away, we decided to move onto less interesting spots in the zoo. I had never been so relieved to leave a zoo. I mean, zoos are amazing. But not this one.

Luckily, next to the zoo, there was one of the prettiest museums I’d ever visited. It made the whole strange zoo visit a much better experience. It was beautiful.

We walked around and admired the beautiful displays, having quality time and talking about random things.

Afterwards, we went to Fashion Street and had lunch. We had our lunch at a restaurant nearby, and it was one of the smallest yet fulfilling meals we’d had in Mumbai. I’m sure we’d discussed this before, that in Mumbai, we were overfed.

Yogashree had an appointment in the evening, and we had to say goodbye to our beautiful Aggie sister. We took a cab back to Aunti’s place and took a really short break.

Due to reasons I could not remember, Daniella, Lalita the housekeeper, and I went outside for one more shopping time. We grew fond of this girl, if it was never mentioned before, and she had taught us some words to survive in the city.

So the last shopping time was our little farewell trip.

Something happened during the last shopping trip though: Daniella hit her head hard and thankfully, didn’t collapse on the street.

The moment we got back to the house, we packed everything and planned the next day for our train ride to Kota. Well, complications were always there. There was already an issue with the train station.

Well, how bad could it be?

For reference, here is our journey since Day 1: